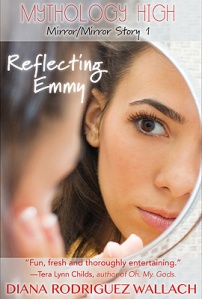 Eighteen-year-old Emmy is in the family business-trapping vapid narcissistic souls into her silver compact mirror for all eternity. It’s what the Rhamnusia family has been doing for thousands of years, all under the direction of Great Grandmother. Only Emmy’s latest assignment, Nara, is about to prove more challenging than she ever expected.

Gorgeous and self-absorbed, Nara is unflinchingly cruel to her classmates. Even her boyfriend, Luke, can no longer tolerate her actions–much to Emmy’s relief since she finds Luke a little more than intriguing. But when Emmy tricks Nara into gazing into her mystical mirror, what she finds there is not what she’s expecting.

Background About REFLECTING EMMY and the MIRROR, MIRROR Trilogy

Diana Rodriguez Wallach, author of the award-winning YA series Amor and Summer Secrets, has created a modern take on the myths of Narcissus and Nemesis in a contemporary teen setting.

Her Mirror, Mirror trilogy debuts September 3rd with “Reflecting Emmy,” followed by “Nara Gazing” in October, and “Shattering GiGi” in November. Each title will be a $0.99 short story sold in digital ebook format for Kindle, nook, and kobo. The titles will be combined to create the complete Mirror, Mirror trilogy, along with bonus materials and a prequel short story, in December 2013.

In early 2014, Diana’s Mirror, Mirror trilogy will be combined with the works of YA authors Jammie Kern and Magda Knight to create the Mythology High anthology, available in ebook and paperback through Buzz Books.

What People Are Saying:

“A fun, fresh and thoroughly entertaining modern twist on the Narcissus myth. Readers will love Emmy and her (mis)adventures. Wallach packs a lot of story into a small packing–romance, friendship and the power of one person to make a difference. The only thing missing… is more!” ~ Tera Lynn Childs, award-winning author of Oh. My. Gods., Forgive My Fins, and Sweet Venom.

“Diana Rodriguez Wallach’s Mythology High is too much fun. Emmy collects narcissistic souls for the family business but after making one tiny little mistake she finds her life turned upside down. These three stories are a must for anyone who loves Greek mythology, feisty heroines and second chances. My only complaint is that I didn’t want them to finish.” –Amanda Ashby, author of Fairy Bad Day and Demonosity

1. What is your writing process like?  Are you a plotter or a pantser?  Do you schedule time to write each day or are you a spree writer?

I used to be an organic writer, and I wrote my first three books by the seat of my pants. But now I’m an outliner. The difference is, I became a mom, so my writing schedule is more sporadic than I’d like and an outline helps keep me on track. Though I wrote Reflecting Emmy, the first short story in the Mirror, Mirror trilogy, organically in less than two hours while sitting in a coffee shop in Philly. I wish all writing could go that smoothly.

2. What is the hardest part about the publishing process for you and how do you get through it? (For me, it’s copyediting and sour cream and onion chips.)

Being on submission. I’m not a patient person and I hate waiting to hear what editors might think.

3. We drop your hero or heroine on a deserted island.  Quick, what are the three things he or she can’t live without?

Emmy can’t live without her silver compact mirror, which she uses it to trap Narcissistic teens for all eternity; her purse, which is where she keeps her mirror, and her “targets” held captive; her iPod, she moves a lot with her job and going to concerts is her favorite pastime.

4. If your story were a film, who would you cast?

For Emmy, the paranormal secret agent who traps teen Narcissistic souls for a living, I’d cast Vanessa Hudgens. Emmy’s Greek, a decedent of the goddess Nemesis, and I think Vanessa has that Mediterranean look.

For Nara, the shallow, narcissistic girl whom Emmy is targeting, I’d cast Molly Quinn (the daughter from Castle). Nara is a strawberry blond beauty just like the actress.

5. Are there any contests or upcoming appearances/interviews/etc. you’d like to plug?

Reflecting Emmy is the first short story in my Mirror, Mirror trilogy. It’s different from your typical book release. Each of my short stories—Reflecting Emmy, Nara Gazing, and Shattering GiGi—will be released individually as ebooks in September, October, and November, respectively. Then they will be compiled together to create the Mirror, Mirror trilogy, with a prequel short story and bonus material, which will be released in December. THEN, my stories will be added with two other authors—Jammie Kern and Magda Knight—to create the Mythology High anthology in January 2014. Whew, that’s a lot of releases. So keep an eye out for all of them!