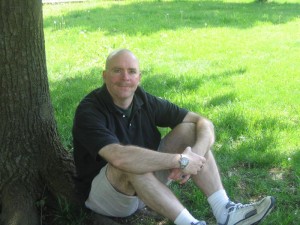 As promised, I’m really pleased to introduce Steven Harper, author of IRON AXE, the first book in a wonderful Norse-inspired series about an outcast, half-troll boy given an earth-shattering (or saving) mission by Death herself.  Publishers Weekly says of it, “Harper begins the Books of Blood and Iron series with an exciting and somewhat unusual quest… His reinterpretations of trolls, giants, and fae folk give this series opener a fresh feeling, while his nods to Norse mythology and folklore root it strongly in fantasy tradition. Readers will be eager to see what’s in store.”  If you want to see what’s in store, comment below for a chance to win the audio edition (via Audible) of IRON AXE!

For those who don’t know, I’ve represented Steven for a long time now…almost exactly a week longer than I’ve been married to my husband.  I started reading his work shortly before taking time off for the last minute wedding prep and literally couldn’t put it down.  I was haggling with the caterer and his publisher all at the same time.  (Can you say insanity?  Sure you can!)  As Steven Harper, he’s written the steampunk Clockwork Empire books for Ace (THE DOOMSDAY VAULT, THE IMPOSSIBLE CUBE, THE DRAGON MEN and THE HAVOC MACHINE), as well as The Silent Empire series and other books like WRITING THE PARANORMAL NOVEL (Writers Digest Books).  As Steven Piziks, he’s written original sf thrillers IN THE COMPANY OF MIND and THE CORPORATE MENTALITY as well as various tie-ins.  And today, he’s written for you about his…

When I was sixteen, I doodled a map of a city with a strangely-shaped harbor.  Eventually, I wondered what the country around the city looked like, so I doodled that, too.  Then, just for fun, I drew the countries around it, and eventually the continent.  By now I had so much time invested in it that I had to keep going.  I got some good drawing paper and colored pencils and put in the terrain and geography.  I worked out weather patterns.

Then I worked out the people.  Since I liked fantasy, the place became a fantasy world.  This country was ruled by elves.  This one by humans, but it was fragmented like Europe in the 1700s.  This country was for dwarves, and over here, merfolk.  I created gods and goddesses as well, nine of them in all.  The notes grew and grew, and I put them into a big blue binder.  Since I called the world Terra, the binder became the Terra File.

Over the years, I used the Terra File on and off.  It was a role-playing game for a long time.  I wrote a couple of short stories set on Terra, but nothing major.  Eventually, I put the Terra File aside and forgot about it.

Then I talked to my editor, Anne.  We were at World Fantasy Con, and she wanted to know what my next writing project would be.  I pitched several ideas, but none grabbed her.  Finally, in desperation, I remembered a short story I’d written years ago about an outcast teenaged boy who was half human, half troll.  I’d always wanted to write a novel about Trollboy, so I pitched that.  The setting was historical Norway, and I’d done a fair amount of research into Viking culture.

“Hmmm,” Anne said.  “I like the character and story, but Vikings are a hard sell.”

Think fast, Steven.  Think!  And I remembered the Terra file.

“Well,” I replied slowly, “I do have an emergency backup fantasy world.”

Anne blinked.  “You have an emergency backup fantasy world?”

“Doesn’t every author?” I said, and described Terra.  “What if I put Trollboy there?”

Back home, I dug out the Terra file and went to work.  A couple weeks later, I had my synopsis and was working on IRON AXE, the first novel in the Books of Blood and Iron.  Trollboy lives!

It pays to keep an emergency back up.

Steven Harper Piziks was born with a name that no one can reliably spell or pronounce, so he often writes under the pen name Steven Harper. He lives in Michigan with his family.   When not at the keyboard, he plays the folk harp, fiddles with video games, and pretends he doesn’t talk to the household cats. In the past, he’s held jobs as a reporter, theater producer, secretary, and substitute teacher. He maintains that the most interesting thing about him is that he writes books.