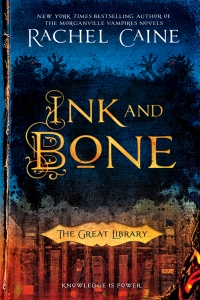 Okay, wow, I have so much to say today that it all wants to fall over itself to come out.  SO MUCH GOOD!  You may know that I’ve had a few books about books or for booklovers or however you want to shout it from the rafters come out this year:http://www.grcogman.com/books/the-invisible-library/ by Genevieve Cogman (out in the UK already, coming in 2016 to the US), INK AND BONE by Rachel Caine (July), ALICE by Christina Henry (August).  And they’re all doing so amazingly well it warms the cockles of my heart.  Yes, contrary to popular belief, agents do have hearts.  They’re steampunk and don’t do well in the cold, so warming them is definitely advisable.  Just this week, among other wonderful things, the Christian Science Monitor reviewed INK AND BONE.  The kind of reviews that puts tears in an author’s and agent’s eyes…though in the case of the agent, they’re actually gear grease and…well, I won’t bore you with the details.  Anyway, to give you just a taste, “Ink and Bone is a modern masterpiece. It’s as striking and brilliant as the Greek fire its characters fear, fusing ancient Egypt, Greek, and Rome in an old-meets-new intellectual thriller.” Awesome!

ALICE, which is just out, has in addition to all the other lists it’s made, just hit io9’s picks of “The Science Fiction and Fantasy You Absolutely Must Read in August” along with N.K. Jemisin’s amazing novel http://nkjemisin.com/books/the-broken-earth/, about which she just did a great post on John Scalzi’s Big Idea blog because, it is a big idea!  (Oh, and did I mention Nora’s wonderful NPR review?  Or the one Naomi Novak did for THE FIFTH SEASON in the New York Times?  No?  Shame on me.)

See how it all wants to come tumbling out?

THE INVISIBLE LIBRARY, while I’m on the kick of book-books, just received a great review from A Sea Change, where among other things, the reviewer exclaims, “I love this book, like really really love it….This is the book for anyone who loves books, who respects the power that words have, who likes strong women and characters with intriguing pasts. It’s also the book for someone who wants to see an inspired use of reptiles”.  Really amazingly awesome!

Okay, a million things to do today, so I must run off, but the good has to be celebrated.  There may even be virtual confetti.  Be glad you can’t hear the noisemakers from there!