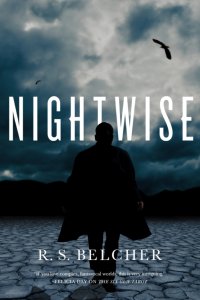 I wished R.S. Belcher a Happy Book Birthday on Twitter and Facebook, but I’m a few days late doing it here on my blog because, well, diverticulitis will do that to a gal.  So, without further ado…*happy Muppet flail* added to *Snoopy dance* for R.S. Belcher’s new release NIGHTWISE!

Now, those of you who know R.S. Belcher for his wonderful weird west novels THE SIX-GUN TAROT and THE SHOTGUN ARCANA might be wondering about this apparently contemporary novel.  I assure you, it has every bit of his trademark lyrical, literary darkness.  You don’t have to take my word for it, of course!  You can read it yourself or check it out on Barnes & Noble’s Bookseller’s Picks for August to see their recommendation.  And…and, good people…Rod has ANOTHER wonderful contemporary coming out in 2016 called BROTHERHOOD OF THE WHEEL, which I so highly recommend I’m getting dizzy just thinking about it!

R.S. Belcher, the acclaimed author of The Six-Gun Tarot and The Shotgun Arcana launches a gritty new urban fantasy series set in today’s seedy occult underworld in Nightwise.
In the more shadowy corners of the world, frequented by angels and demons and everything in-between, Laytham Ballard is a legend. It’s said he raised the dead at the age of ten, stole the Philosopher’s Stone in Vegas back in 1999, and survived the bloodsucking kiss of the Mosquito Queen. Wise in the hidden ways of the night, he’s also a cynical bastard who stopped thinking of himself as the good guy a long time ago.

Now a promise to a dying friend has Ballard on the trail of an escaped Serbian war criminal with friends in both high and low places–and a sinister history of blood sacrifices. Ballard is hell-bent on making Dusan Slorzack pay for his numerous atrocities, but Slorzack seems to have literally dropped off the face of the Earth, beyond the reach of his enemies, the Illuminati, and maybe even the Devil himself. To find Slorzack, Ballard must follow a winding, treacherous path that stretches from Wall Street and Washington, D.C. to backwoods hollows and truckstops, while risking what’s left of his very soul . . . .

“Belcher twists all manner of legend, occult beliefs, history, and myth into a sophisticated magical framework and offers his typically eccentric cast of characters… The wisecracking and musically opinionated Ballard narrates this fast-paced and violent story with an offbeat humor and intensity that will have readers believing that magic and conspiracy exist all around them.” —Booklist

“Belcher’s relentlessly vivid imagination and brilliant prose drive this sensational noir urban fantasy novel, reminiscent of Richard Kadrey’s Sandman Slim series. In Laytham Ballard, Belcher has created an ideal anti-hero: He’s constantly pursuing good by the meanest, most cutthroat ways possible, serving as a lightning rod in this world of dark spells and blood sacrifice, and he’s moving relentlessly toward a phenomenal magical and moral showdown. Belcher’s prose is clipped, brutal and beautiful by turns, bringing a striking artistry to an often violent, intense story that swiftly becomes addictive. One can only hope for Laytham Ballard’s quick return, as this is a book that is wholly addictive.” —Romantic Times Book Reviews, Top Pick!