One of the most exciting parts of my job is selling a debut series.  That excitement ramps up to eleven (call back to Spinal Tap) when the first book in that series actually releases!  Thus, I’m VERY pleased today to introduce you to CONSPIRACY OF ANGELS, Book #1 in Michelle Belanger’s awesome Shadowside series.  Name ring a bell?  You might know Michelle from her from her regular appearances on Paranormal State.  She’s also been featured in numerous programs on HBO, the History Channel, CNN Headline News, etc., about the paranormal world and the modern vampire community to which she belongs and is well known for her non-fiction such as The Psychic Energy Codex and The Dictionary of Demons. 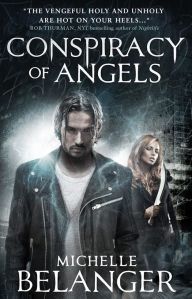 “In Conspiracy of Angels, Michelle Belanger presents a gripping fantasy of angels, demons, and awesome powers. Belanger’s incredibly detailed imagery instantly immerses you in the angelic earth that she has created.” – Mugglenet

When Zachary Westland regains consciousness on the winter shores of Lake Erie, his memories are gone. All he has are chaotic visions of violence and death… and a business card for Club Heaven. There Zack finds the six-foot-six transexual decimus known as Saliriel, and begins to learn what has happened.
Alarming details emerge, of angelic tribes trapped on Earth and struggling in the wake of the Blood Wars. Anakim, Nephilim, Gibburim, and Rephaim—there has been an uneasy peace for centuries, but the truce is at an end.

With the help of his “sibling” Remiel and Lilianna, the lady of beasts, Zack must stem the bloodshed before it cannot be stopped. Yet if he dies again, it may be for the final time.

I’m also excited that my new novel, BLOOD HUNT, releases today from Samhain, especially since I get to pull Egyptian mythology into this one!   I’ve been lucky to have so many people helping me spread the word.  You can check out some special posts here:

5 Questions in 5 Minutes at Slippery Words 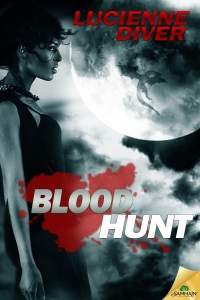 Fame is no longer the name of the game…it’s survival.

Tori Karacis is back in L.A., relieved to once again match her passport photo thanks to a tattoo that controls her gargoyle-esque wings. Her newest case doesn’t involve gods or an impending apocalypse. It does, however, involve murder.

Jessica Roland’s suspicions began when her brothers returned from Egypt eerily different. The terror kicked in with the ritualistic murder of her parents. Her real brothers would never have done such a thing, yet their guilt seems indisputable. What could it be? Curse of the Pharaohs? Some kind of brain-eating bacteria?

At the scene of a second attack, there’s evidence it’s the work of Set, the god of chaos, who should have been locked away a long time ago. And hello, there’s a new arrival. Neith, a warrior goddess who’s got the hots for Tori’s ex, Nick Armani.

Tori should be cool with that. After all, she’s involved with Apollo-that Apollo. Still, it’s a bit much for Neith to ask for seduction advice! Meanwhile, Set is gaining strength, chaos is leaking all over the place, and L.A. is a powder keg set to blow.

Warning: Relationships heat up and danger mounts. Prepare for chills, thrills and kills when Chaos makes its Hollywood debut.