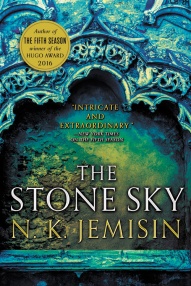 I’m not saying you have to run out and grab N.K. Jemisin’s Broken Earth series right now – for yourself and everyone you know – I’m just saying that THE FIFTH SEASON is back on the USA Today Bestseller list this week two years after initial publication, that it won the 2016 Hugo Award for Best Novel, which the sequel, THE OBELISK GATE, won in 2017, and that the conclusion to the trilogy, THE STONE SKY is burning up all this years best of the year lists! Check it out:

AudioFile’s 2017 Best Audiobooks (no link here, since it seems to involve sign-up)

And while I’m at it, there’s Brit + Co’s list of 11 Sci-Fi Books to Binge While You Wait for “Star Wars Episode VIII, and THE STONE SKY came in at #4!

2 thoughts on “The Broken Earth series!”