It seems the days when I could count on things being quiet enough to post a leisurely blog are far behind me, so I’m a couple of days late posting my happy book birthdays for the week. Here are some great, great reads just out! 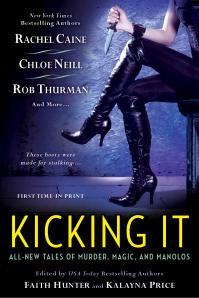 KICKING IT edited by Faith Hunter and Kalayna Price

This is am amazing urban fantasy anthology featuring, as the cover says, “All-New Tales of Murder, Magic, and Manalos”.  Okay, not all the boots are Manolos, but, hey, alliteration…what can you do?  Featured here are some of the very top names in urban fantasy…and me.  Awesome stories from Rachel Caine, Chloe Neill, Rob Thurman, Faith Hunter, Kalayna Price, Christina Henry, Chris Marie Green, Shannon K. Butcher and (last but least), me.  Really, seriously worth checking out!

Amanda Quick said, “Susan Krinard was born to write romance.”  I couldn’t agree more.  She’s won the Romantic Times Career Achievement Award for Contemporary New Reality, as well as many Readers’ Choice, PRISM and other awards for her paranormal romance.  NIGHTMASTER is the second in her exciting Nightsiders series for Harlequin’s Nocturne line (the first is DAYSIDER).

Deep undercover, Wyoming special agent Slade Kent comes to Dead River Ranch with only one thing in mind: justice. Bent on solving a string of recent crimes, as well as his father’s long-unsolved murder, he won’t let down his guard for anyone. Until beautiful heiress Amanda Colton and her baby are attacked. He’ll do anything to protect them…even put his heart on the line.

Amanda’s done with deception, but the irresistibly mysterious Slade draws her trust. When danger—and uncontained passion—spark, they must both put aside secrets and agendas for survival…and love?

Looking for more great reads?  GoodReads has announced their Best Books of 2013!  I’m particularly excited to have TWO authors on the Paranormal Fantasy list – the fab Chloe Neill and Faith Hunter!

Also, Amy Christine Parker and I recommended some Rebel Reads in our video Tuesday for the YA Rebels (see below).  And if you scroll below that, you’ll see a couple more of my Rebel Reads that I’d somehow neglected to send, but which are great recommendations for boys particularly: SUBJECT SEVEN by James A. Moore and PATIENT ZERO by Jonathan Maberry.  (Also, my 13 year old recommends Scott Westerfeld’s Leviathan series, Kristen Simmons’s ARTICLE 5, and Christopher Paolini’s Inheritance Cycle.)

One thought on “Book Birthdays and Rebel Reads”